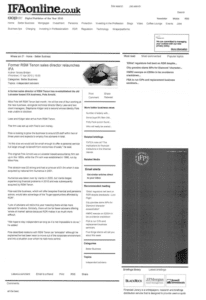 Mike Pole left RSM Tenon last month. He will be one of four working at the new business, alongside technical director Barry Lees and two client managers. Stephanie Kidger and a second whose identity Pole was unable to disclose.

The firm was set up with Pole’s own money.

Pole is looking to grow the business to around 25 staff within two or three years and expects to employ five advisers in total.

“At this size we would still be small enough to offer a personal service but large enough to to benefit from economies of scale,” he said.

The original Pole Arnold  was a Leicester based accountancy firm set up by in the 1950s, while the IFA arm was established in 1995, run by Mike Pole.

This division was 22 strong and had a turnover of £1.5m when it was acquired by national firm Numerica in 2001.

Numerica was taken over by Vantis in 2005, but Vantis began experiencing financial problems in 2010 and was subsequently acquired by RSM Tenon.

Pole said the business, which will offer bespoke financial and pensions advice, would take advantage of the “huge opportunities afforded by RDR”.

“Lots of advisers will retire this year meaning there will be more demand for advice, Similarly, there will be fewer advisers offering ‘whole of market’ advice because RDR makes it so much more difficult.”

“We hope to stay independent  as long as it is not impossible to do so,” he added.

Pole described relations with RSM Tenon as “amicable” although he explained he had been keen to move out of the corporate environment and into a situation over which he had more control.