Pole Arnold raise over £3,300 for The Youth Adventure Trust 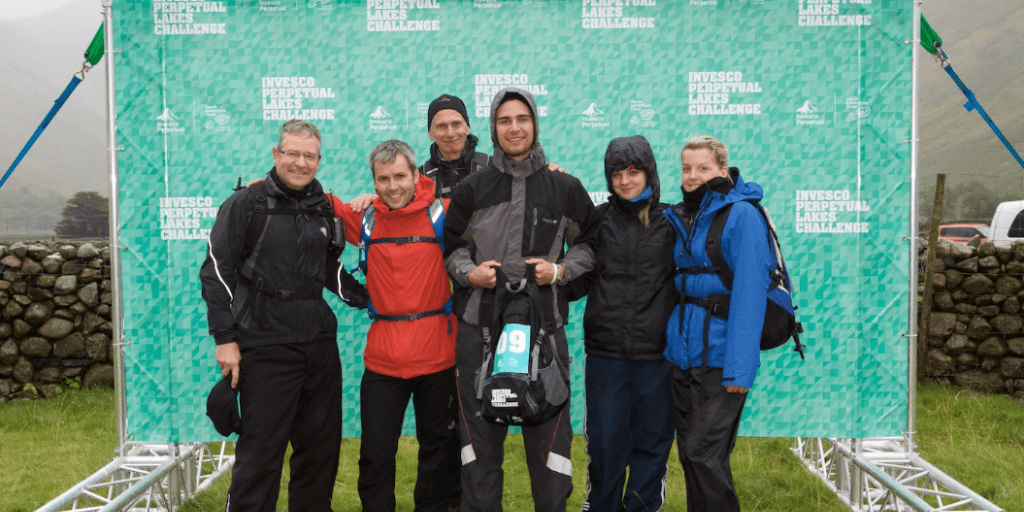 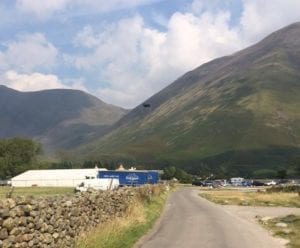 In September 2015, Pole Arnold raised over £3,300 for the Youth Adventure Trust by taking part in the Invesco Perpetual Lakes Challenge; A tough weekend consisting of a 16km Hike up 3 of the Lake Districts Highest Peaks, a 28km bike ride over rough terrain and finally finishing with a 5km stretch along Coniston water in a Canoe! However, no amount of practice routes on the bikes, evenings in the Canoe or days spent breaking in our walking boots could prepare us for the challenges we were unknowingly going to face, it turned out that the “Challenge” would live up to it’s title for reasons beyond the planned events.

Our driver (Rebecca’s husband) was diagnosed with Pneumonia 4 Days prior to the event, however he managed to be checked out of Hospital to participate. In order to ensure his health remained in good condition, he was checked into a B&B at Wasdale Head during the event.

We started off the weekend well by picking up our Donated Land Rover Discovery from LakeLand Land Rover in Coniston. During this, freak weather decided to attack the Lake District, resulting in very strong winds and tents flying away. To ensure this wouldn’t be happening to us, we took the time to double peg our tent. Smug and happy that everything was set up,  we went and joined the other teams at the challenge brief.

During the brief, the strongest winds hit and resulted in a number of tents being torn from the ground and thrown 20 yards across the field. A member of each team went out to check if their tent was ok, everything went quiet for a few minutes as members of each team started to return, and word got around that it was team 6’s tents that had gone.  We were greeted with the feeling of relief, A feeling that would quickly diminish when we started to wonder why Mike hadn’t returned, that’s when it all dawned on us, we’re team 9 and what is 6 upside down? Sure enough,  it was our two safely “double pegged” tents that had been flung in to the air!  As it was too dark for any other tents to be put up, we got on our head torches to search for lost items scattered across the field (the most important item being Becky’s walking boots that she would need in less than 10 hours’ time!) and headed off to the only place we could sleep, the rickety Medical Tent.

The first day began a few hours late due to the Hiking route having to be amended as the weather conditions did not improve. At 10:12 Pole Arnold set off up the ridge to Great Gable where unfortunately Rhiannon suffered an asthma attack and was forced to retire, accompanied by Jamie who took Rhiannon to the medics.

Our team name was “Fantastic Four” and ironically 4 pushed on through the wind and rain and skirted round Great Gable, before topping Kirk Fell, Scafell Pike and Lingmell to the knee breaking race back to Wasdale head during which Richard fell on his knee, Rebecca on her shoulder and Mike head over heels! Arriving back in 6 hours 10 minutes and in a very respectable 7th place. 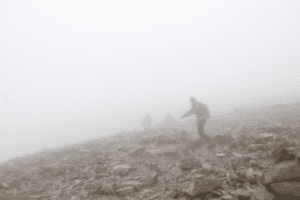 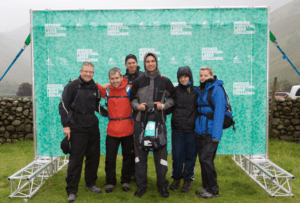 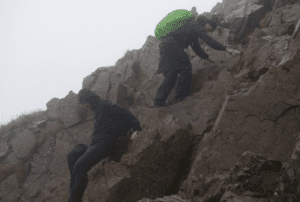 After showering and having a well-earned rest, we went to view our bikes for Day 2, only to find out that we were 2 bikes short! Luckily, we notified the Marshalls in time, and managed to get two last minute replacements ready for the early start.

We set off at 06.43am on Day 2 of the challenge, which we quickly realised was going to be the toughest. Three very severe climbs, across bog land and steep technical rocky descents,  there was so much of the terrain that was un-rideable and often when riding we were overtaken by walkers, the biking was almost impossible 80% of the time and the ride quickly the earned it’s nickname “A Hike with a Bike.” Jamie fell on the 1st decent and fractured his knee on a rock. However despite carrying on for the second climb and descent, was for 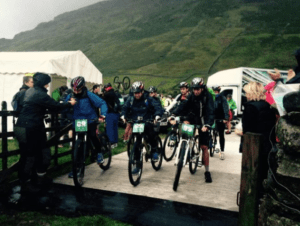 ced to retire and this time Rhi stayed with him, once again leaving a team of four to complete the challenge. Given our injury misfortunes we lost quite a bit of time in the biking challenge but still managed a respectable 6 hours 16 minutes finishing 12th in this section.

The Ride brought us back to Coniston Water where we were Hoping to find Rhi and Jamie to enable a couple of us ‘Hike with a bikers’ to duck out of the canoeing. Unfortunately they were still with the Marshalls and therefore the remaining four had to get straight into the canoes for the 5km row to the head of Coniston Lake. 58 minutes (6th place) later we arrived and finished the challenge. Fortunately Jamie, Rhiannon and Rob were there waiting at the finish line. 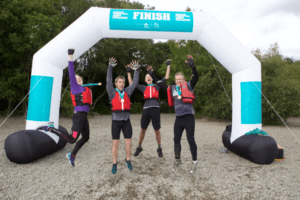 Pole Arnold completed all three challenges in a total time of 13 hours 20 minutes, coming 11th out of 30!

Press comment on why George Osborne should rethink one aspect of the new pension rules
October 10, 2014
Go to Top