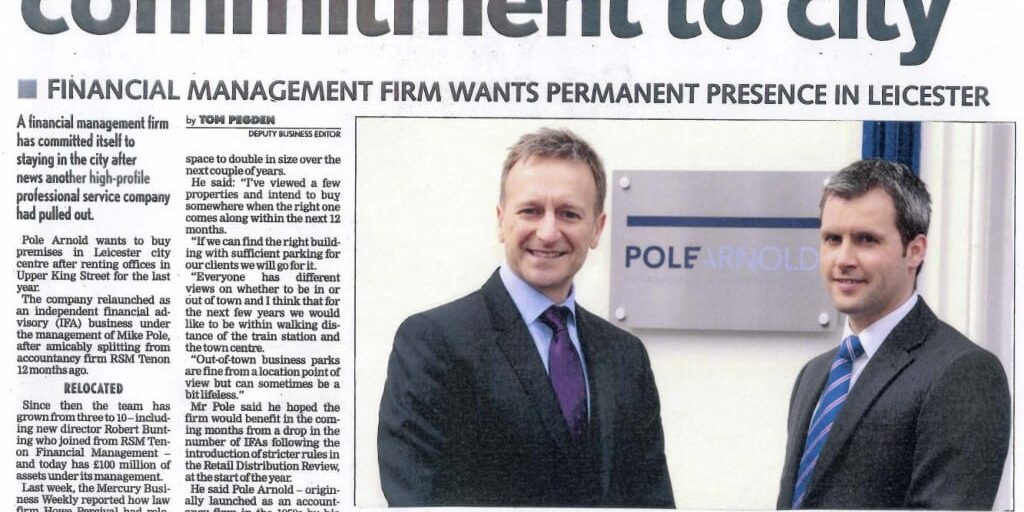 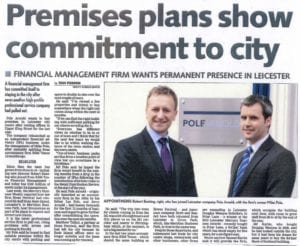 A financial management firm has committed itself to staying in the city after news of another high profile professional service company has pulled out.

The company relaunched as an independent financial advisory (IFA) business under the management of Mike Pole after amicably splitting from accountancy firm RSM Tenon 12 months ago.

Since then the team has grown from 3 to 10 – including new director Robert Bunting who joined from RSM Tenon Financial Management – and today has £100Million of assets under its management.

Last week, the Mercury Business Weekly reported how law firm Howes Percival had relocated 62 staff from Bede Island, Leicester, to Meridian Business Park, near Braunstone as part of it plans to expand and attract new clients.

It is the latest professional service firm to pull out, citing problems with access and parking in the city.

Mike Pole said he hoped to find suitable premises within the city centre with parking and space to double in size over the next couple of years.

He said: “I’ve viewed a few properties and intend to buy somewhere when the right one comes along within the next 12 months.

“If we can find the right building with sufficient parking for our clients we will go for it.

“Everyone has different views on whether to be in or out of town and I think that for the next few years we would like to be within walking distance of the train station and the town centre.

“Out-of-town business parks are fine from a location point of view but can sometimes be a bit lifeless.”

Mr Pole said he hoped the firm would benefit from a drop in the number of IFAs following the introduction of stricter rules in the Retail Distribution Review at the start of the year.