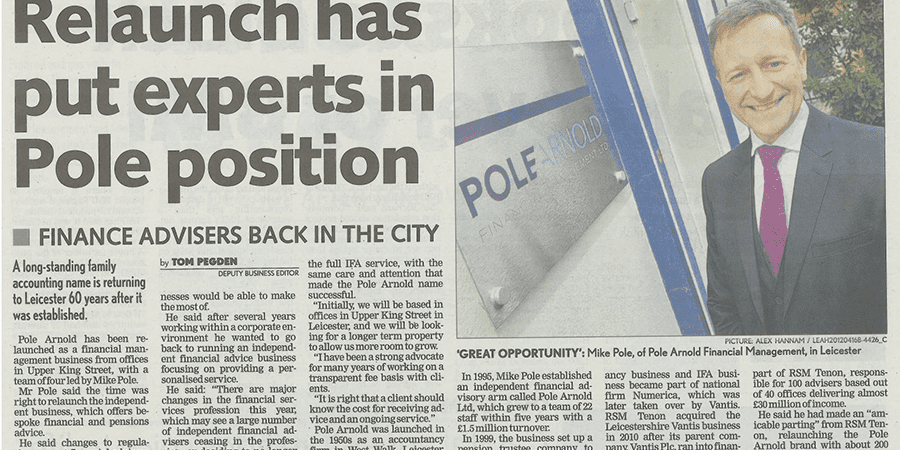 Finance advisers back in the city 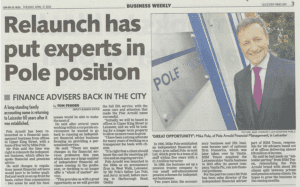 A long-standing family accounting name is returning to Leicester 60 years after it was established.

Pole Arnold has been relaunched as a financial management business from offices in Upper King Street, with a team of four led by Mike Pole.

Mr Pole said the time was right to relaunch the independent business, which offers bespoke financial and pensions advice.

He said changes to regulations meant financial advisers would be better qualified and work on an up-front fee basis, rather than commission – two areas he said his businesses would be able to make the most of.

He said after several years working within a corporate environment he wanted to go back to running an independent financial advice business focusing on providing a personalised service.

He said: “There are major changes in the financial services profession this year, which may see a large number of independent financial advisers ceasing in the profession, or deciding to no longer offer a “whole of market” service.

“This provides us with a great opportunity as we will provide the full IFA service, with the same care and attention that made the Pole Arnold name successful.

“Initially, we will be based in offices in Upper King Street in Leicester, and we will be looking for a longer term property to allow us more room to grow.”

“I have been a strong advocate for many years of working on a transparent fee basis with clients.”

“It is right that a client should know the cost for receiving advice and an ongoing service”.

Pole Arnold was launched in the 1950s as an accountancy firm in West Walk, Leicester, by Mr Pole’s father Les Pole, and Jerry Arnold, before moving to Harborough Road, Oadby.

In 1996, Mike Pole established and independent financial advisory arm called Pole Arnold Ltd, which grew to a team of 22 staff within 5 years with a £1.5 million turnover.

In 1999, the business set up a pension trustee company to run small self-administered pension schemes for independent businesses.

Two years later, the accountancy business and IFA business became part of national firm Numerica, which was later taken over by Vantis, RSM Tenon acquired the Leicestershire Vantis business in 2010 after its parent company Vantis Plc, ran into financial problems.

For the past two years Mr Pole has been sales director of the independent financial adviser part of RSM Tenon, responsible for 100 advisers based out of 40 offices delivering almost £30 million of income.

He said he had made an “amicable parting” from RSM Tenon, relaunching the Pole Arnold brand with about 200 clients split between private and pension scheme clients.  He hopes to grow the business in the coming months.