Taking an economic trip into the unknown 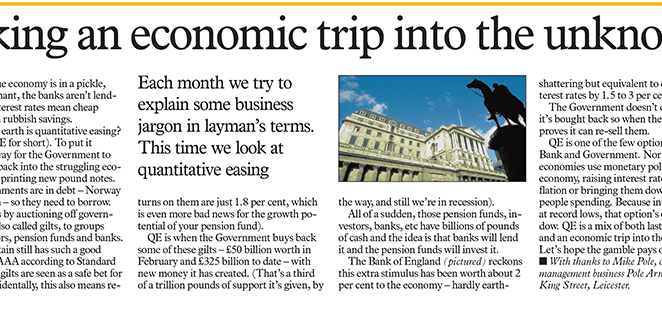 We all know the economy is in a pickle, growth is stagnant, the banks aren’t lending and low interest rates mean cheap mortgages and rubbish savings. But what on earth is quantitative easing? ( We ’ll call it QE for short). To put it bluntly, it’s a way for the Government to pump money back into the struggling economy without printing new pound notes. Most governments are in debt – Norway is an exception – so they need to borrow.They do this by auctioning off government bonds, also called gilts, to groups such as investors, pension funds and banks.

Because Britain still has such a good credit rating (AAA according to Standard and Poor) UK gilts are seen as a safe bet for investors. (Incidentally, this also means returns on them are just 1.8 per cent, which is even more bad news for the growth potential of your pension fund).  QE is when the Government buys back some of these gilts – £50 billion worth in February and £325 billion to date – with new money it has created. (That’s a third of a trillion pounds of support it’s given, by the way, and still we’re in recession). All of a sudden, those pension funds, investors, banks, etc have billions of pounds of cash and the idea is that banks will lend it and the pension funds will invest it.

The Bank of England reckons this extra stimulus has been worth about 2 per cent to the economy – hardly earth shattering but equivalent to dropping interest rates by 1.5 to 3 per cent. The Government doesn’t cancel the gilts it’s bought back so when the economy improves it can re-sell them. QE is one of the few options left to the Bank and Government. Normally, western economies use monetary policy to steer the economy, raising interest rates to curb inflation or bringing them down to get people spending. Because interest rates are at record lows, that option’s out the window. QE is a mix of both last chance saloon and an economic trip into the unknown. Let’s hope the gamble pays off.

With thanks to Mike Pole, of financial management business Pole Arnold, in Upper King Street, Leicester